I was driving home last night, listening to music on my iPod through my iPhone when I received two texts and a phone call alerting me to the passing of Steve Jobs. While I wasn't shocked, I was definitely saddened by the news. 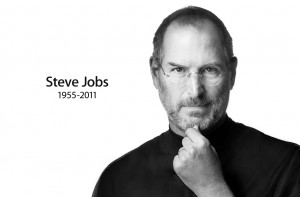 Everyone knew he was sick and had been for some time. I remember reading years ago how he had said he'd work for as long as he could meet his duties and expectations as Apple's CEO. On Aug. 25, he had resigned from Apple and who would have thought that just six weeks later, he'd be dead.

Even having worked in Palo Alto for over 20 years and knowing Jobs frequented the areas I was always in, I never ran into him or met him. Sure, I'd see his Mercedes around town (everyone knew it was the one with no license plates, just a bar code where the license plate was supposed to be) but I never had the pleasure of meeting him. There was this one time, however, while in Whole Foods I overheard someone say "Steve Jobs is here" -- I resisted the urge to go through the store to find him!

I have always admired what he was able to do. Building a company; getting basically fired from that company; starting another company, and bought another; and then his triumphant return as iCEO of company he had co-founded in 1996.

In the years since his return to Apple I had come to think the "i" stood for "inventive" or "imaginative" or "innovative". I am confident it stood for all of those, plus more.

Upon reflecting further, the 1997 Apple "Think Different" advertising campaign has been swimming around in my head. Jobs though differently, and as I thought more about the text that ad, which undoubtably he had strongly contributed to, I thought more and more he could have been one of the 17 iconic personalities presented. The ad reads...


Here's to the crazy ones. The misfits. The rebels. The troublemakers. The round pegs in the square holes.The ones who see things differently. They're not fond of rules. And they have no respect for the status quo. You can quote them, disagree with them, glorify or vilify them.About the only thing you can't do is ignore them. Because they change things. They invent. They imagine. They heal. They explore. They create. They inspire. They push the human race forward. Maybe they have to be crazy. How else can you stare at an empty canvas and see a work of art? Or sit in silence and hear a song that's never been written? Or gaze at a red planet and see a laboratory on wheels?We make tools for these kinds of people.While some see them as the crazy ones, we see genius. Because the people who are crazy enough to think they can change the world, are the ones who do.


Steve Jobs did Think Different. He challenged us to rethink what we knew about computing, how we worked with data and how we interacted with media and music. It appeared he was never happy with the status quo. Always pushing. With the team he assembled around him, he helped change the computer industry, the music industry, the movie industry, the way we shop and mobile telephone and technology.

Yesterday, after I turned off my iPod and turned on the radio, there was someone talking who said something like, "There are people who live in the past, the present and the future. Steve Jobs lived in the future."

I couldn't agree more. The technological world is a better place because of Steve Jobs and this "Mac Fanatic" will miss his influence on it.

So, here's to the crazy one. The rebel. The troublemaker. The one who saw things differently. While some may see him as the crazy one, I see genius. Because the person who is crazy enough to think they can change the world, is the one who does.