I received a panicked text from a colleague last week asking me what I knew about a company who he had allowed to connect and clean their two home Macs. He had received a notice on one of the machines saying he had malware on the network and to call a number to have assistance removing it. Immediately, I knew it was a scam. 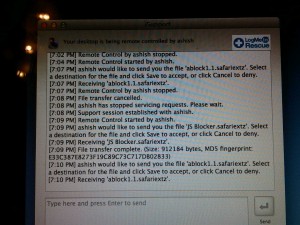 Unfortunately, he had already called the number and paid them via credit card over $200 to 'fix' the issue. I quickly had him end the call and remove the computer from the internet, severing the LogMeIn rescue session this operator had created on both a laptop and desktop machine. But, it was too late. The operator had already began to fix the issue by loading Safari extensions and other programs.

Once the connection was severed, I was able to help him by logging into his machine and cleaning up the mess this operator had made.

One of the things I noticed in the cleanup process was MacKeeper was installed onto the machine. I asked him if the operator had installed it or if he had. He told me an official looking window had told him he needed to clean his Mac because it had been infected and is full of malware and spyware about three months prior. He also said since it was Mac, it must have come from Apple, right? Not so much!

This past week alone, I've seen three machines with MacKeeper installed. In one of the instances, the user had paid MacKeeper for their services and in all three, they relayed a similar story to how it got installed.

I am sure MacKeeper has some value, but it's not the first time I've heard similar stories from friends and clients. MacKeeper gets installed, problems follow, pop-up ads multiply, issues don't get fixed. Best choice is to uninstall MacKeeper and not install it again! For instructions on how to uninstall, you can search for them online or let me know. I'm happy to do it for you!

So, what should you do when a window appears, looks somewhat official and close enough that it could come from the computer's own software? Most of the time, unless a piece of software has been installed to capture issues (such as virus protection or a malware program), these messages are nothing more than ads meant to look like a computer message. They are tricky. Even when I see them, from time to time I have to look twice.

If you've had a problem with MacKeeper or with any tricky pop-ups, of course you can contact me and I can help clean things up or search online to see about fixing it yourself. You should always have a good backup available, but be aware, depending on how old it is, it may have the same issues.

Be vigilant and don't be scammed!