Blog: Is the Apple hype machine out of control?

Is the Apple hype machine out of control?

Rumor sites on the Internet yesterday ware abuzz with speculation about Apple's cryptic homepage message posted about 24 hours ago. Everything from streaming iTunes, to the Mac App store, to a cure for cancer was tossed around as the reason for the day "you'll never forget". At 7 a.m. this morning (California time), we learned the true answer to this riddle was the arrival of The Beatles catalog to iTunes

My son even asked me last night about this announcement, if I knew what it was. I told him I had some ideas, but it's most likely not as cool as it could be -- not as big as Apple wants it to be. I told him it may be any of the things above or something totally out there. I also said if you have a theory of what it may be, I could find evidence to support it. That's what makes Apple's PR so good (or so bad, depending on what side of the fence you are on).

Don't get me wrong. I like The Beatles, and those that know me or have read my blog before know my love for Apple. I just don't understand a whole 24 hour lead-up to an announcement, which for the true, die-hard Beatles fan, is almost a non-issue. 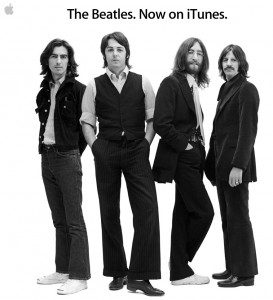 There have been things missing from the Apple iTunes Store library, and while The Beatles may have been the most glaring omission, it's by far not the only thing missing. There is a lot of music I've searched for (ok, a lot may be overstating it a bit) and have not found. What is the solution? Dig out the old CD I have and rip it into iTunes. Now I have my music (which I had already purchased before) with me digitally. I would suspect any Beatles fan has not waited around for Apple and The Beatles to strike a deal but has done just this.

But, looking back now, I guess Apple and their PR staff did their job. Millions of people were talking about it; It was on the local TV and radio news; Speculation flooded the Internet; and I'm sure lots of users sat in front of their computers at their appointed local time, refreshing their browser windows (as I did) to see what all the excitement was about.